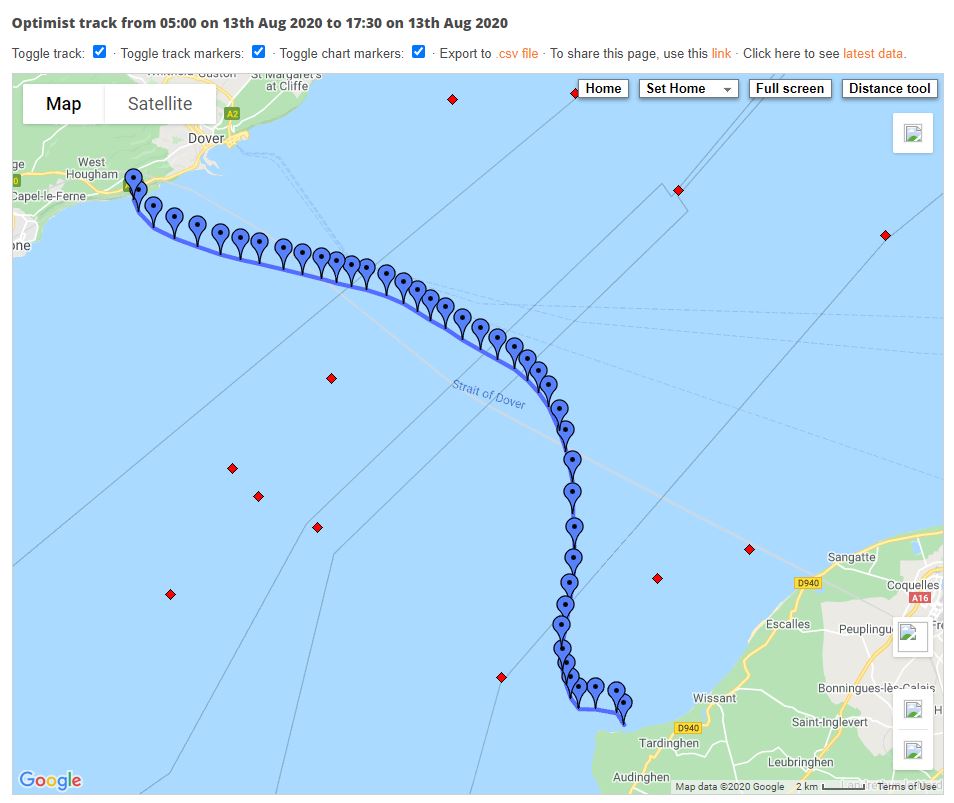 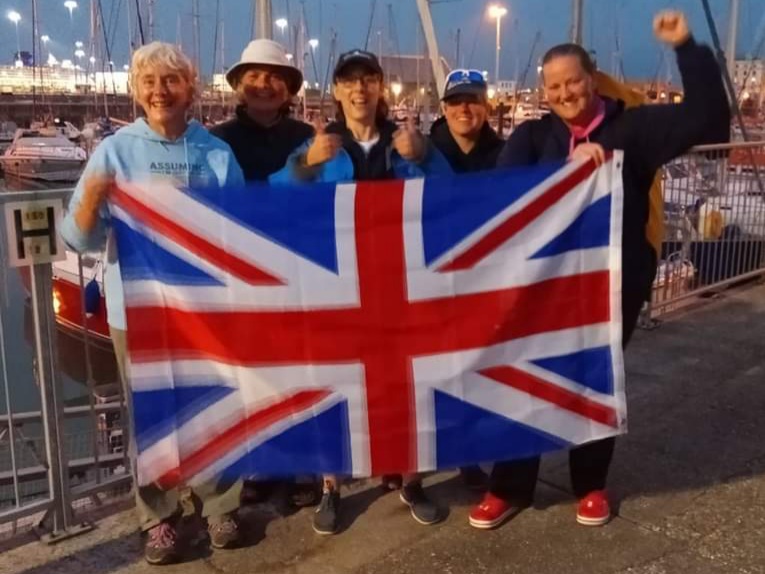 On the morning after our big swim, I’m up early watching Fireman Sam with my son on my lap: Claire is presumably still asleep in her campervan, social distanced on my driveway, and I’m wondering if yesterday really happened. Did we really swim the Channel?

Our original tide was at the end of June but then the pandemic happened. Channel swims got the all clear in July and I started to get that knotty feeling in my stomach and began training a little more seriously (less heads up breast stroke/chat and more front crawl). We were given a few tentative slots that didn’t materialise and then we agreed a tide at the end of September with our pilot.  I relaxed, thought I might book a lesson and would spend the next month working on my speed.

On Wednesday 12th August, I was on my way home from coaching when I received a frantic call from Claire – we had been offered a new slot the next day.  ‘Ok’ I said hesitantly.  By lunchtime the weather forecast had changed and it was all off. I was relieved and relaxed again.  At 7.45 that evening while I was putting my son to bed and in the middle of singing the Fireman Sam theme tune I got another call – we were back on and had to meet in Dover at 4am (Thursday 13th August).  I spent the next 2 hours packing, baking flapjacks and trying to stay cool and calm (just like Fireman Sam). Then I grabbed a few hours of fitful sleep.

I was really grumpy driving down to Dover at 2am. It was stormy, there were trees down blocking my way out of the village and I was convinced I was going to have to endure a day of rough seas and vomit. I wanted to be excited but it all felt a bit surreal – in my mind we weren’t doing our relay until the end of September yet somehow my body was standing in the car park at Dover Marina in the rain! I wasn’t alone; we were all a bit subdued loading the boat. It was bumpy as we left the harbour but I felt fine, not even a little nauseous. In fact, it was the first time in about a week the air felt fresh instead of stifling hot and I could breath.

We agreed our swim order on the way round to Samphire Hoe – Hayley, Kristina, Me, Kate and Claire. Hayley started us off at 5.09 as dawn was breaking. We saw a pod of porpoise and strangely everything just felt calm as the sun appeared from behind the clouds.  I carefully watched the first changeover as Kristina jumped in and Hayley clambered up the ladder knowing I was next. Hayley reported that the sea was toasty (it was 20 degrees rather than the 15 I was expecting). She had a great swim and I actually started to look forward to my leg.

My turn came around really quickly.  As a faffer, it was a bit of a shock to jump straight in (albeit as gracefully as a belly flopping giraffe) and not stand waist deep for five minutes contemplating my entry. I started swimming quite furiously and it took me a while to calm down and find my rhythm. I could hear my elbows plopping, my breath sounded like Darth Vader, and strangely I could feel my left foot coming out of the water. Focus focus! An hour felt like two – I could see them all chilling on the boat, chatting and I thought they had forgotten me. Eventually Claire waved the ’15 minute’ to go sign and I calmed down and managed to focus. The last few minutes flew by and before I knew it, I was having a cuppa and flapjack on the boat.

Little did I know that Kate had dived (show-off) in to the water to start her swim, dislodging her googles and hat. With leaky goggles, she was quite disorientated she seemed to be heading to Bilbao rather than Calais. Then she then lost her swim hat (a SwimSolutionS one no less which is now polluting the Channel). Despite this her stroke looked smooth and very consistent.  We were making great progress and as we played Frogger in the South West shipping lane Claire had taken over and crossed paths with some huge ships.

Before we knew it, we started our second rotation and Hayley was off again. My second swim felt really relaxed despite the appearance of jelly fish and I swam us out of the separation zone in to the North East shipping lane – it flew by. I didn’t want to get out.  As the sun sparkled through the water, I received a small jelly kiss which felt like a badge of honour and made me smile.

Although the sun was shining it was misty and we couldn’t see land at either end for a long time. Then suddenly France appeared and we realised that Claire’s second swim was going to be her last. Hayley powered through her third swim and we were so convinced that Kristina would then land on Cap Gris-Nez that we sent her off with a Union Jack down her cleavage. Poor Kristina, she’d had a long swim on Wednesday afternoon and then had to rush down to Dover from Leeds to make the 4am start. Yet with very little sleep, here she was powering through her third swim!

If she didn’t make it, I was also going to get a third swim. I couldn’t really tell how far off we were – we had looked close for an hour or so.  Just as I was getting ready to relieve Kristina a huge seal appeared.  Hayley promised me they didn’t eat swimmers but he might want a kiss. I don’t think I have ever swum with such purpose – within a minute the boat stopped and the pilot told me to aim for beach to the left of the rocks. WHAAAT?  I thought I was still a mile from the shore, why were they leaving me so soon.  Hold on, I can see sand under the water, I must be closer than I think.  Soon I see a flock of seagulls on the water just staring at me, and just past them a crowd forming on Wissant Beach.  As my arm touched the sand it was time to stand up.  I skipped up through the water and on to the sand. We had done it and I was receiving a round of applause. I had only been swimming for 11 minutes yet I lapped up it up for the team.  I frantically stole a shell from the beach for each team member as I tried to explain in Franglaise that I was part of a five person relay just in case anyone mistook me for a solo swimmer. I then swam back to the boat giggling. That was quite possibly the best 11 minute swim I’ve EVER done!

As I climbed the ladder the engine roared and I was handed a bottle of fizz as we headed back to Dover, euphoric. Somehow it had almost felt too easy as if we had somehow cheated. We were lucky with the conditions and the tide was almost non-existent and because of that we completed the crossing in 12 hours and 11 minutes instead of the 15 hours we predicted.  On reflection I realise that we had already done hard work. I didn’t ever fancy a Channel relay because I didn’t like the cold or swimming in the salty sea. I started my training at the end of last summer by acclimatising to the cold water. I didn’t put my wetsuit on as the water got colder and we headed in to Autumn, even though I wanted to. I did my two-hour qualifier with Kate in 12 degrees at the end of October and had to be dressed afterwards because my fingers weren’t working.  I carried on swimming in skins in to November but then I bottled it and stuck to the pool over winter. I managed to get back in the lake in April and despite the lockdown I just about managed to get in three rushed river swims a week while my 2-year-old had his afternoon nap, supported by my swimmy friends.  I even managed to pop down to Dover to do the night swim with the Dover Channel Training crew after my sons had gone to bed. Now that was a fun swim.

The Lunachicks hadn’t all met each other before the 13th August and certainly hadn’t been able to train together but we all clicked and laughed and supported each other brilliantly. The team name was perfect.  As we approached Dover, we saw Sea Leopard and waved madly at Catherine Stefanutti and the inspiring team, commemorating the 50th Anniversary of Margot Anderson’s Channel Solo.  I don’t think it’s that unusal to bump in to Catherine in the Channel and as the sun set over the White Cliffs we could see a pod of Dolphins in the distance and I suddenly understood – the mysterious allure of the English Channel washed over me – it was the perfect end to the perfect day.

Who is joining me for the next relay? 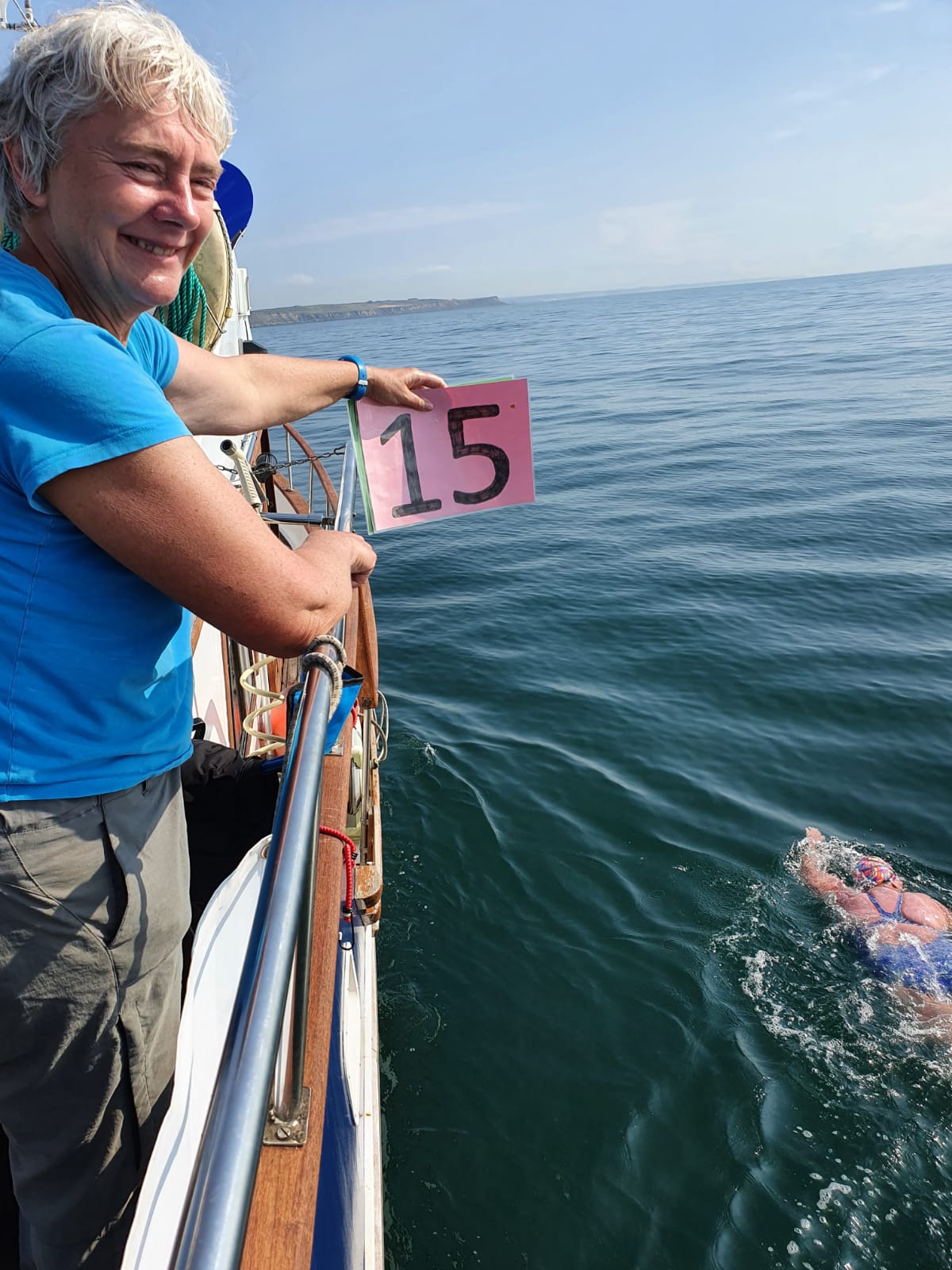 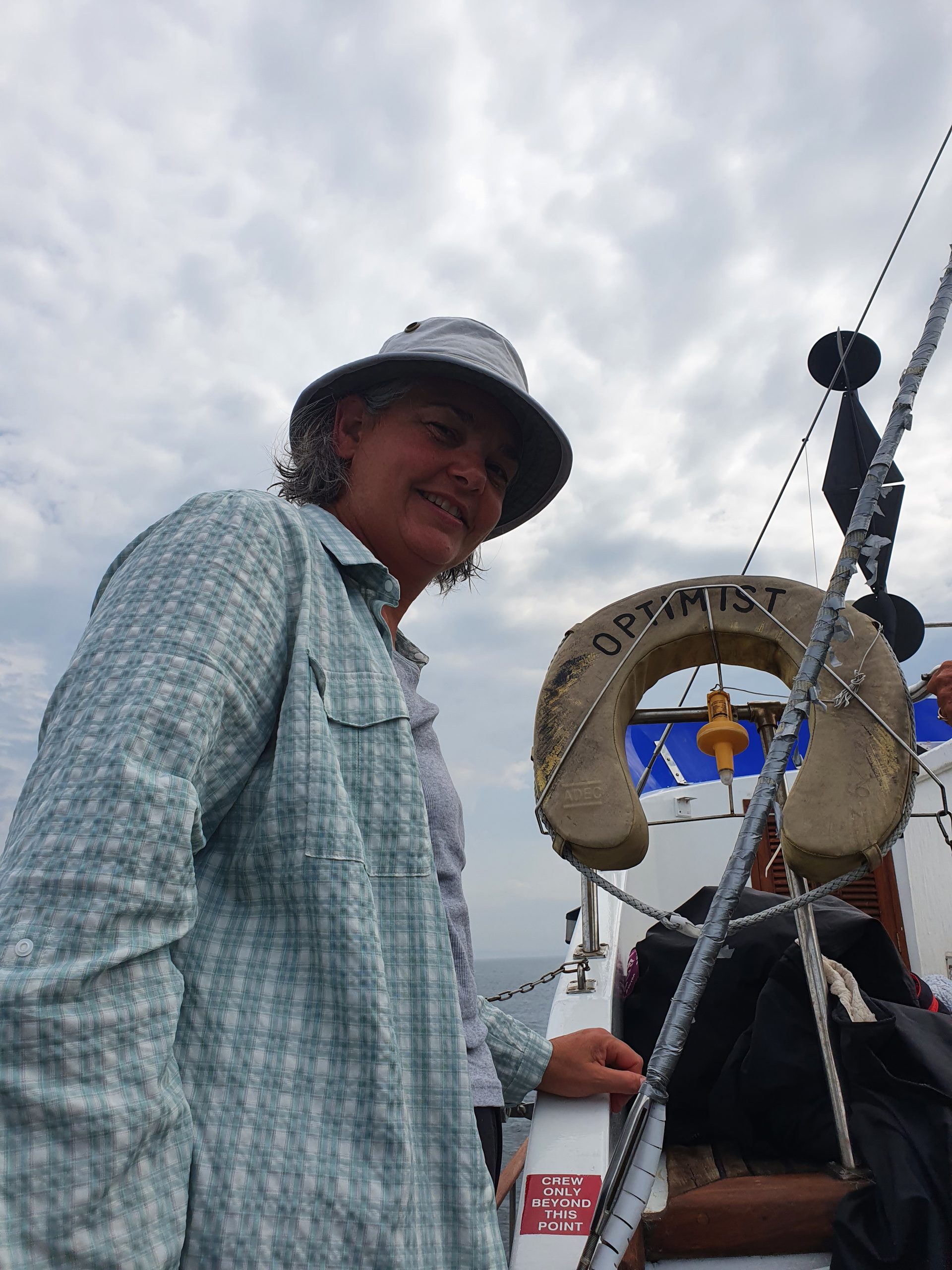 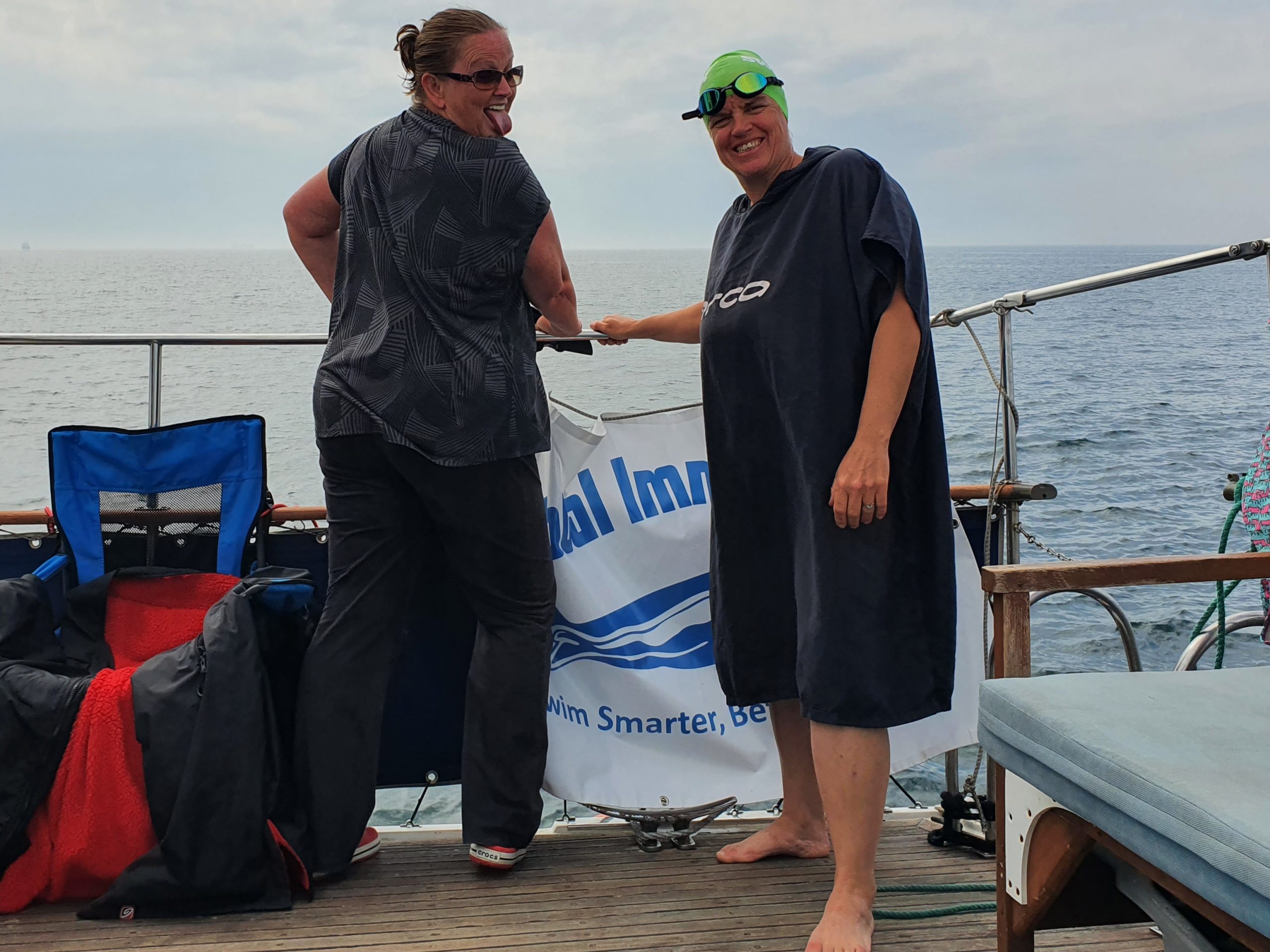 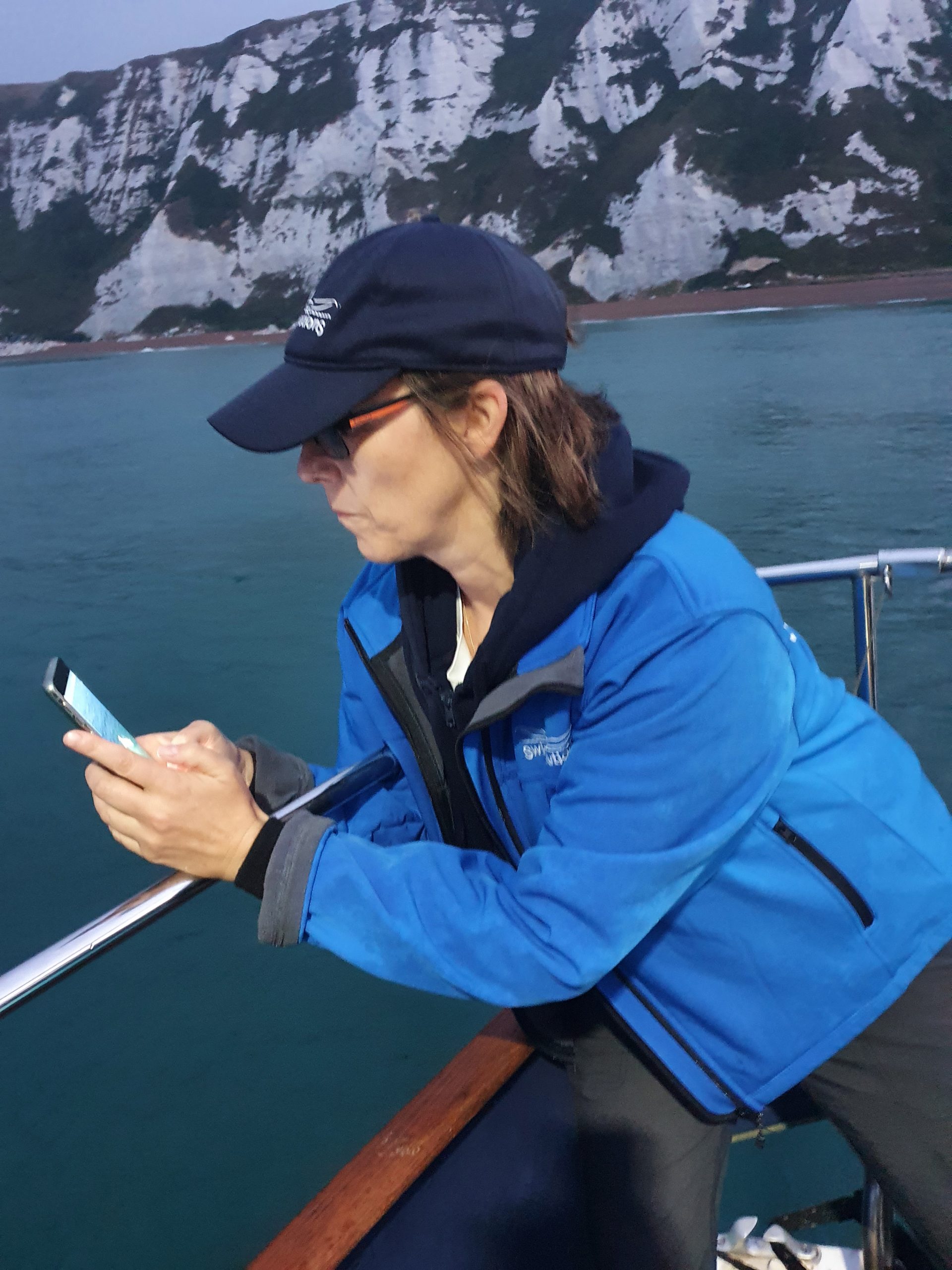